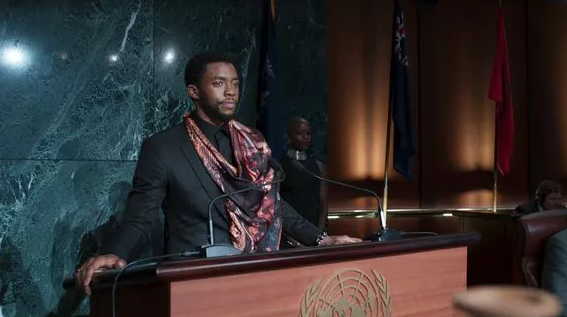 My kiddo Shane and I haven’t always had the greatest relationship, but when I  introduced him to LEGO Marvel Superheroes for the Xbox, suddenly I was the Fun Parent. I’m not the biggest Marvel fan in the world, but out of some 200 playable characters, I could explain the superpowers of the first 50 or so, and I could Google the rest of them. Shane loves superheroes now. All of his obsessive collecting urges that used to be for Thomas the Tank Engine trains suddenly found a new outlet. And unlike the Thomas trains, playing Marvel heroes let him fly or shoot fire, and they all have stories that I can explain.

Well, up to a point, anyway.  I had to sum up the tail end of the Dark Phoenix saga as “then there are clones and breeding super-mutants and it gets kinda dumb.”

But we like movies. And we like superheroes, including Black Panther. In the game, Black Panther gives out side quests, and you can unlock him as a playable character. So Saturday of opening weekend, you better believe our family had our butts in the seats.

I warned the kiddo it was PG-13, like Revenge of the Sith, so it might be scary. And it might be long, like The Last Jedi, which he walked out of for ten minutes or so. And there were a lot of movies that happened before it, so it might be a little confusing. But I’d be right there to explain anything.

I didn’t have to worry.

I have never seen him so actively involved in a movie. He asked a million questions, and none of them to Mama, because Daddy was Designated Explainer of All Things Marvel. I think the two most difficult things to communicate quickly were that the vibranium suit could absorb energy and release it again, and why Killmonger shot a guy to finish him off even though the guy was going to die anyway. (For the record, my wife’s explanation of “because the writer wanted to show him as a bad guy” is a lot more of a teachable moment than my suggestion, “because he was extra mad at what the other guy said.”)

So I was heavily biased in favor of this movie. Shane liked the movie, so I liked the movie. When the lights came up, I wasn’t about to get into trouble because my idea for a family outing was too grimdark for a six-year-old to handle. This is not always a given. Recently we watched Jeopardy and a question about Dr. Manhattan came up, so he asked me “who are the Watchmen?” That wasn’t hard to field, but it was immediately followed by “Are they good guys or bad guys?”

Yeah, we’re going to have to wait a little while before explaining that one.

Anyway, to use my formal Reviewer Voice, I thought Black Panther rocked. Beverly (my daughter) was not as thrilled; she thought it was inappropriately violent. And my wife, who’s a much bigger fan of books than action movies, made what seemed like a rather true observation: the characters in Black Panther serve the needs of the action. The Wakandans are a highly advanced pretty-much-utopia, but they’re also a monarchy where leadership is determined by single combat. Does that tradition make sense? Mmm… in a superhero action movie, yes, but probably not outside of that. Why are the Dora Milaje running around with vibranium spears rather than guns? Because they make for cooler choreography, that’s why. (To be fair, I don’t want to see Wakandans firing guns at each other and leaving bodies everywhere like it’s 1990s Rwanda, so bring on the spears, I say.) And, as often happens with action movies, we examined T’Challa’s character arc.

A caveat: nobody in my immediate family saw Captain America: Civil War. From what I’ve read, T’Challa gets an extensive introduction there. But in BP, T’Challa’s conflict is largely external. His father’s spirit says he’s a good man, which makes it hard to be a good king… and yet, we don’t see him grapple with kingly decisions very much. Once he’s crowned, he chases down Klaue on a mission of personal vengeance, and then his time is pretty much taken up defending his throne. He gets beat up by Killmonger, who’s a better hand-to-hand fighter without the Panther powers, and then in his rematch, triumphs because…

Maybe he’s more used to the powers than Killmonger. Maybe he just got lucky. But his victory wasn’t because he’s exemplifying some great revelation about the mantle of kingship or because he’s right and Killmonger’s wrong about the nature of the world. (The battle for Wakanda was, however, swayed because of his recruitment of allies, so I’ll give him a nod there… but siding with the enemy of your enemy is something both Killmonger and T’Challa share and is basically Warrior Stuff 101.)

That said, Black Panther does something that’s pretty rare in comic book movies: the hero learns a lesson from the villain’s example. My wife, who headed for the bathroom as the credits rolled, didn’t see this, because it only comes up in the mid-credits scene, when T’Challa declares to the United Nations that Wakanda will no longer be isolationist. And that’s where the real ending to the movie lies. T’Challa has been changed, and while he expressed a bit of that when he funded a few outreach centers in Oakland, T’Challa’s character arc is only capped once he is determined to change Wakanda from the path it’s been set on for centuries. He doesn’t become complete and then triumph over Killmonger: he learned from Killmonger and then he becomes complete. It’s like culminating an on-screen romance with a kiss in the final frames of the film. Now he’s a real king.

This is where Black Panther’s social commentary and world-building got really interesting for me, and why I’d want to see a sequel. The premise of the movie is that Wakanda has thrived because it’s a special fantasy kingdom. In a departure from every real-world African country I can think of, colonialism never took root there. At some point, they decided to hide their technological prowess and created a satellite-fooling illusion and what is probably the most incredibly well-kept secret ever shared by a million-plus people. When they say “we do not speak of this” early in the movie, they freaking mean it. No foreign spies have ever discovered the vibranium that their society has run on for what must be a century or so. Now that’s some sharp self-policing.

I’m forgiving that questionable world-building, because that’s how comics roll, and it was basically all the backstory of the movie, a.k.a. the setup or the “gimme.” ‘S cool. I’m on board.

The mythmaking of the hero is also worth discussion. He’s from an ancient bloodline of kings, he’s got money and a semi-magical flower and incredibly advanced technology on demand, plus supreme executive power… and to top it all off, he’s got a loving family that has his back. T’Challa is a hero, but he’s one who has been given everything in life. He’s a good person, sure, and has many great qualities, but I think someone should point out that he’s privilege personified.

Then we get Killmonger, who’s had none of it. His family’s broken up. He grew up in a section of Oakland where they didn’t even have basketball nets, they had to use a crate. He went into the military, he trained and he learned, all so he could fight when it matters and gain the power necessary to distribute Wakanda’s hoarded resources to the oppressed peoples of the world.

This is where the movie broke some new ground. Because here we have an American movie where an African-American is the villain and a straight-up African is the hero. The movie is not American-centric, as opposed to most Marvel movies, and this conflict contrasts America with the rest of the world. Killmonger’s visible acts of villainy include stealing artifacts from Wakanda, killing tons of people in Iraq and Afghanistan, meddling in a foreign  country’s leadership (okay, he’s got a claim to it, but still), and planning to use spies to sell weapons all around the world.

The only thing he doesn’t do is transform into a bald eagle eating apple pies, ’cause all of those dick moves are about that American. When he is defeated (in a fight on a literal underground railroad, no less), it’s hard for an American audience not to feel a bit for the guy. He’s the scrappy underdog we’ve been programmed to root for… but just because he’s self-made doesn’t mean you want him in charge.

So that brings me to the next question: is T’Challa, Mr. Wakandan Privilege, really that heroic by American standards? Wakanda values a royal bloodline, a might-makes-right combat ceremony to choose a leader, and has a high-tech wall to keep outsiders out. And let’s not mince words: “outsiders” means everybody who’s not Wakandan. White people. Asian people. Probably most black people, too, ’cause they referred to Killmonger as an outsider because of where he grew up, despite the fact he’s related to the royal freaking family. And for a nation we assume is a benevolent actor on the world stage, the Wakandans sure have a lot of weapons to defend themselves against neighboring countries. You know… this sounds kind of like an ethno-state, and I’m pretty sure most Black Panther fans would agree that that’s a Bad Thing.

“Whoa,” you may say. “That’s a pretty dark reading of this superhero movie.” It is, but Black Panther deserves some examination, at least as much as those Web articles that point out that the Ewoks probably ate some Stormtroopers. But I’m not going to bash the movie, because Black Panther doesn’t fall into that trap a hundred percent. Rather amazingly, the film has its never-seen-on-the-big-screen-before cake and manages to eat it, too. At the end of the movie, the black fantasy hero of the black fantasy world can no longer rely on the world of the past. His connection to his legacy has been forever severed: the heart-shaped herbs have been destroyed, so he can no longer speak with his ancestors. Finally on his own with the mantle of kingship, T’Challa does the heroic thing in the mid-credits sequence and rejects Wakandan tradition. “The wise build bridges and the foolish build barriers,” he says, and ends centuries of secrecy and isolationism. He’s a patriot, as are his allies, but he is one who sees the need for change.

Because of that mid-credits sequence, the fantasy we’ve been buying into for the whole of the movie is over, for both the characters and the audience. Maybe we looked into the mirror and saw how appealing the idea of “Wakanda First” might be, but now T’Challa, and we, must face the real world.

And I don’t know about you, but I want to see what happens next.

So does my kiddo.