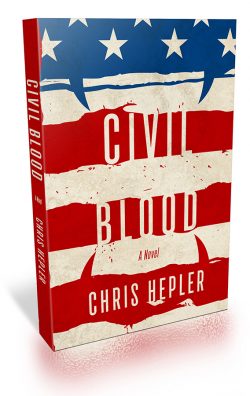 IT’S A GENERATION FROM NOW

AND JUSTICE MAY BE DEAD

In a future America still recognizable as our own, the outbreak of a vampire virus becomes front-page news. An infected trial lawyer named Morgan Lorenz sues the corporation that tried to conceal the existence of the virus, claiming medical negligence on a massive scale.

Facing potential bankruptcy, the Benjamin Rush Health Initiative files a unique motion. They say Lorenz cannot sue, because he’s no longer human. For him, and all vampires like him, the Constitution simply doesn’t apply.

Infinity DeStard and her “Forced Protection” team are assigned to kill Lorenz before the case reaches the Supreme Court. It’s hard to fake enthusiasm ever since her own infection, but she has no choice. If she breathes a word about her condition, her team will execute her.

In the face of injustice, how long can she lie to them… and herself?

“Shadowrun meets Law & Order in this thoughtful thriller where magic has been refined, technology is topnotch, viruses can transform humans, and corporations believe they are above the law.”
–Jennifer Brozek, author of DocWagon 19 and Never Let Me Sleep

“Civil Blood is a smart, fast-paced novel — a well-integrated political thriller/science meets supernatural/action-adventure with well-rounded characters and lots of kick-ass action. Fans of V-Wars and The Passage will eat this up!”
–Dana Fredsti, author of the Ashley Parker series and Spawn of Lilith series

“The novel keeps a good pace, shifting gears upwards as needed but never losing the overall considered momentum. It presents an unusual virus-based vampire type that is neatly realised, and I thoroughly enjoyed it.”
–Andy Boyle, of the vampire blog Taliesin Meets the Vampires

Order it for Kindle

Order it in Paperback

Order it for B&N Nook (BACK SOON!)

Order it for Kobo (BACK SOON!)

Order it for Apple iBooks (BACK SOON!)