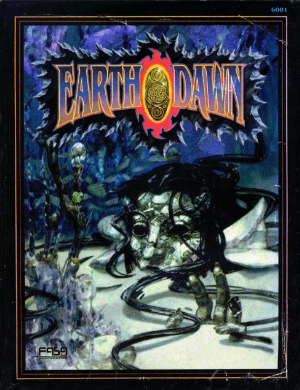 Shadowrun’s sister game, Earthdawn, was a high fantasy set in an age of spectacular magic, with familiar races from Shadowrun as well as a few new surprises. Its approach seemed to be “we know you like D&D tropes, so we’ll let you have all of those, but we’ll give rationales for all of them.”

A worldwide invasion by demonic beings called Horrors led to dungeon-like doomsday bunkers called kaers; the evil empire was housed on the isle of Thera, i.e. Atlantis, and the rules of character classes were explained by the excuse of “that’s how magic works.” It’s a little strange to think a warrior adept’s fighting abilities are more magical talent than natural talent, but magic infused so much of daily life that players could get quite used to it. One of the main sources of travel were airships: sea-going galleons infused with elemental air so they could fly over land and sea and pick fights with dragons and who knows what else.

It was (and is) an interestingly-crafted game. It had a mathematically sound but totally counter-intuitive dice system. Whenever you got a bonus, you wouldn’t add +3 or whatever, you’d roll bigger dice that averaged out to the bonus you got. So instead of rolling two six sided dice (2D6) and adding 3 like in a normal game, your +3 bonus would give you a roll of 1D10+1D8. This kept results random, but still weighted toward your average. In practicality, everybody always had to consult a chart no matter what roll they were doing.

I enjoyed Earthdawn, more for the imaginative world than the nitty-gritty of the game system. For me, it never quite had the same visceral pull as Shadowrun. It was a valiant attempt to go up against D&D, and D&D simply had more adherents, more supplements, more production values. Earthdawn combat was weighted to give low-level characters survivability, a relief from D&D’s tissue-paper starting stats. However, it meant in practicality that it was often a drawn-out slugfest against even the weakest opponents. No fantasy game contrasted to it as strongly as Legend of the Five Rings, where even a high-ranking samurai could be crippled with one blow and killed with a second. This is not to say it is a bad game, but one that felt close enough to D&D that it often lived in its shadow. Me, I like combat that gives the players so much agency that when it’s their turn, something amazing or something horrible happens.

My writing partner and I contributed to a supplement about magic and then wrote the entirety of the Ork Nation of Cara Fahd.

The Ork Nation of Cara Fahd