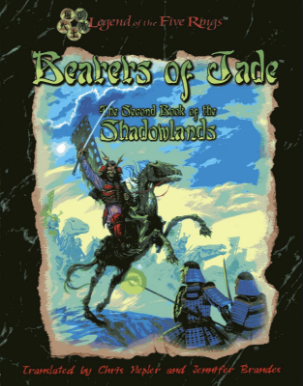 So after a phone call from Alderac saying essentially “Send us a proposal,” my writing partner and I combed through all the Japanese mythology and folklore books we could. In a few days, we’d whipped up an outline. The book would not just be a book of monsters: it would be a book of reasons to incorporate the Shadowlands into your campaign. It would bring the danger of the Taint into places that were previously thought safe. It would answer lore questions like “Why don’t the Seven Clans just combine forces and invade the Shadowlands?” and my personal beef, “Why are the Crab the best clan to fight oni as opposed to the other clans who are faster or can pierce armor?”

After our outline got hit up with some edits and we got the green light, we went into writing mode. We wrote lots of little mini-narratives to accompany each monster or spell or cursed item so that a GM reading it could turn them into plots. I threw in every scrap of info I knew about kobudo weapons, ruthless hand-to-hand combat, and things that would give martial artists nightmares. We had a couple of major principles we followed:

Right now, those of you who have played adventures against the monsters in the book will probably be nodding your heads, because we got abusive.

Against the most powerful creatures, we used the Hida royal family (Kisada, Yakamo, and O-Ushi) to see just how much mayhem the Crab clan could stop. For lesser creatures, we used a pack of six Rank 3 characters, since the game had been out for a year or two and we guessed many campaigns had PCs that were growing in power. And at the summer convention called Origins that year, we put together a scenario called “Mirror, Mirror” that pitted a batch of six disparate clan characters working as a Phoenix Inquisitor team in Winter Court at the Hida clan’s ancestral home.

I haven’t kept up much with L5R over the years, but from what I can tell, the reaction to BOJ broke down like so:

So over time, I’ve developed a few regrets about the book. I wish we’d researched the card game more before writing it, and there’s typos in it that still dig at me. Some rules, like using obsidian, are just not that comprehensive. We threw a lot of stuff at the wall, and poof, it was canon a few months later.

Then of course, there’s balancing the maho-bujin. I still want them to be abusive (they’re like MMO boss monsters — one of them is supposed to take on a whole party), but giving them a cost in blood for each technique would make thematic sense. If you were to flip the Rank 3 and Rank 1 powers, you would have a greater variety among the ranks’ actual combat effectiveness. Limiting the number of attacks to the enemies’ lowest Honor score as opposed to the highest would also go a long way toward parity.

I’d write more, but this assumes that you’re not just making bad guys with the Way of the Shadowlands supplement that came out soon afterward. A lot of it seemed like a direct antidote to BOJ, and there were plenty of well-balanced rules in there. I have nothing but good things to say about that sourcebook.

As for the horror advice, that’s a subject for a whole blog post.

If there’s one thing that I’m proudest of in the supplement, it’s fleshing out the world of the Crab. There was a point in the other supplements of the time where the consensus seemed to be that Crabs were brutes, bullies, and evil sorcerers who fought little bitty goblins. I wanted them to have space for player characters that were tough, ruthless, and gave their all in a never-ending war against the forces of hell.

A story of heroes is only as good as its villains.

Bearers of Jade’s .pdf is available at DriveThruRPG.com here.