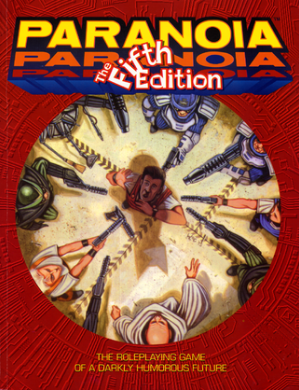 The premise of Paranoia is that in a post-nuclear-holocaust sci-fi world, all that is left of humanity are clones living in an underground city. Everything is ruled by The Computer, which I put in capital letters for the same reason you capitalize “God” or “Satan.”

The Computer knows all and sees all. The Computer is your friend. The Computer wants you to be happy. So much so that failure to be happy is treason. Treason is punishable by summary execution. You and your fellow squad of Troubleshooters are assigned to find and terminate traitors.

The joke? All of you are traitors. The only trick is proving it, because false accusations of treason clearly indicate the accuser is a traitor. In the Computer’s infinite wisdom, each player receives six clones, i.e. six “lives” before the sadistic Computer decides to retire the clone family. Six chances is definitely good, because all Troubleshooters are issued lasers.

Won’t this be fun?

Stay alert! Trust no one! Keep your laser handy!

My writing partner Jennifer and I wrote three products for West End Games, the original publishers of Paranoia. Only one ever made it to press before West End went bankrupt, a parody of White Wolf’s “World of Darkness” series of games, specifically Vampire: The Masquerade. The other two were going to be a Shadowrun parody (Welcome to BUG Sector) and the “Long-Lost Third Edition” of the game.

We can’t show you Third Edition for copyright reasons.

If there was one bit of uncopyrightable advice I would want to pull out of Third Edition,  it’s to think of the game as a squirt gun fight. Players’ first instincts when they get killed is to plot revenge, and harbor grudges, leading to all the problems of intra-party homicide from all those other roleplaying games. You can’t play Paranoia that way, or it won’t be fun.

A good Paranoia game is a meritocracy of humor. If it’s funnier for a player character to live, the GM should keep them alive. If it’s funnier for them to die, then the laser fire (or force sword stabbing, or plasma generator malfunction, or whatever) becomes the punch line.  Everything else is commentary.