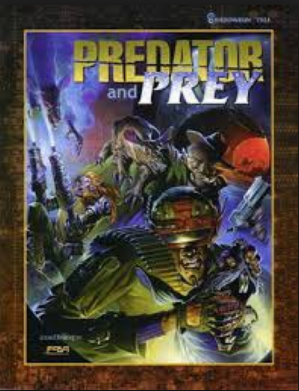 In the last days of Second Edition Shadowrun, there was a pretty crazy idea for an adventure pack: theme it around Awakened (magical) animals, put the statistics for all the animals published so far in the game in one place to make the book a good reference, and dream up excuses to turn a cyberpunk adventure into fodder for as many When Animals Attack videos as possible.

These adventures, “Forbidden Fruit,” “Baser Instincts” and “Wild Kingdom” really went to town with that final objective. It’s not every day you find yourself wrestling down a guy who’s chopping his own arm off to get out the coke bugs, battling among the crowds at the local zoo, or listening to your GM utter the phrase “cascading barrage of ballistic seal fat.”

Though there are only three adventures in this supplement instead of Missions’ four or the five in Shadows of the Underworld, the writers here are a little more vicious. True to the killer instinct of these predators, the writers seem to have aimed to surprise players, take away their advantages, and crank the adrenaline for most of the fight scenes, not just the climactic ones. Creatures that were relegated to the back burner in most campaigns divide and conquer the players, hit them with combined-arms scenarios, or simply use tricks the players have never seen before. In two out of the three adventures, many of the worst creature attacks are under command of an intelligent opponent.

I wish I could say I’m 100% proud of “Wild Kingdom,” but even though I have a special love for anything my wife and I wrote, it’s never been my favorite adventure. As we discovered during playtesting, it’s got a few big flaws and, they were never corrected.

The first is that it will take multiple nights to play. It was meant to introduce some of the places and critters in Cyberpirates and it shows in the pacing. There’s a lot of stuff happening:

The second flaw of the adventure is given some lip service in the Debugging sections, but it really needs to be addressed. The premise of the opening half of the adventure is that the players are put aboard a ship with a cargo container they’re not supposed to look in. They are meant to take it on a cross-Atlantic trip for 22 days and… really… never peek once. Then the adventure tries to force a failure condition on the players and punishes them for something that will rarely be their fault. Then it tries to lean on the players and threatens that they have no way to get home unless they play along… in a corporate haven where there’s undoubtedly an airport and an embassy.

It will never work in a million years.  Players are inventive and here they have almost unlimited time. Yes, the door to the container is locked, but that’s no barrier to the guy with the Rating 10 maglock passkey and a lucky roll, or a monomolecular whip and intense curiosity. To be fair, we as writers did our best to say that no astral snoops can get in because of the cultivated living barrier in the walls, but if a magician can shapechange and get into the vents, the big surprise inside is no surprise at all. (You could say there’s a fungus-covered grate in the vent, I suppose, but just trust me: players will ruin this.)

The solution may be counterintuitive, but respects the runners’ reputation and intelligence more: junk the twist. If you want a much more straightforward adventure you could complete in two sessions or maybe one all-day marathon, just have Ms. Johnson fly the characters to Sekondi. There, Ahmadou says their prize researcher got snatched by someone and because they suspect an inside job, they’re using freelancers that aren’t local. There’s a few security guards recovering from the assault on the cargo ship who can describe what happened. Then the players start the legwork and are off and running.

There is one minor edit I take issue with: when chasing someone through a rice paddy, it is not just a Stealth (4) check to track them. It’s a rice paddy. That’s Stealth, concentration Farmland. It is the only time players will use Farmland Stealth in the entire written canon of Shadowrun, so savor it.

Welcome to the jungle, indeed.

Predator and Prey is available here.