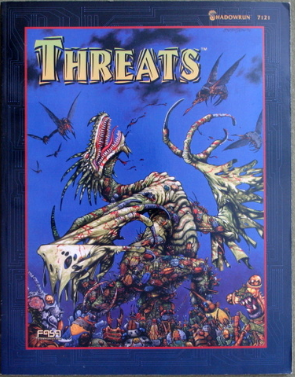 In 1996, Shadowrun was just coming off the release of Earthdawn and it seemed like every supplement and adventure was about elves, dragons, or elves translating dragon-speak so they could run for President. In order to give the game a shot in the arm, the developers wanted a supplement that showcased the wide variety of big bad enemies that the world had to offer.

Each Threat would be a conspiracy theory detailing some dubiously sourced information. If you believe what the poster is saying, these threats would have global reach, vast resources, and plenty of enemies who’d want to hire the shadowrunners to put a dent in their operations. If the gamemaster and players gave the idea a thumbs down, no harm done, since most conspiracy theories are unbelievable garbage and the Internet is full of them.

The Threats ranged from terrorist groups to magical orders to vampires to some super-deckers that were literal brains in jars hooked up to the Matrix. My writing partner Jennifer and I proposed a conspiracy to represent the insidiousness of anti-metahuman forces. Called “By Human Means” in their native German (“Mit Menschlichen Mitteln”) they were masters of eugenics and propaganda. They would hit shadowrunners where it hurt, by infiltrating DocWagon and other corporations that provided much-needed medical services. They would be the puppet-masters behind the Humanis Policlub and the human-supremacist terrorist group Alamos 20,000.

This plan did not survive first contact. For starters, one of the other writers pitched a take on Alamos 20,000, and it was a pretty good take with some straightforward bad guys that most runners would want to stomp in the face. Mit Menschlichen Mitteln got renamed something players could pronounce, “The Human Nation,” and the devs added the necessary nudges toward more violent direct action in the form of a branch called the Flaming Sword. All necessary nudges, but the end product seemed kind of like Alamos 20,000’s little brother, whose main purpose was to highlight that there were so many anti-metahuman groups that they needed to be represented twice in one book. Had I any idea that someone else was doing Alamos, I would have pitched the Sons of Sauron (a pro-metahuman terrorist group).

At the end of our submission, we half-heartedly joked that if FASA wanted  anything more, we could always say, “Hey, there was also this mysterious game company that predicted everything that was about to happen throughout the last 60 years.”

The response? “Holy crap, do that, but don’t call it FASA.”

We pitched. We got greenlit. We wrote a second Threat.

This one grew out of my love for the supplement Shadowbeat, which gave rules for playing media-savvy characters like reporters, rock stars, and athletes. The one thing all these other Threats would hate is a reporter exposing their crimes for the world to see. So we made a dinky cable-news company called KSAF. They were wired in to something big: they got mysterious messages from an unknown sender that tipped them off to critical events in the Shadowrun universe. So they got pictures of the Great Dragon Ryumyo when he first buzzed a Japanese bullet train; they had images of Daniel Howling Coyote, and so on and so on. The little company sold their material to the major networks, who rarely gave them credit, so they kept a low profile.

The identity of the sender was never explained, but any GM could take a stab at it. Maybe it was a super-smart AI with a predictive algorithm. Maybe in the future, someone invented time travel but all they could send back was photons, i.e. e-mail. Maybe some powerful Free Spirit had some kind of divination magic and a sense of duty. The point was, KSAF was a tiny little Threat to all the other Threats, but with a well-placed viral video, they might be able to bring them crashing down.

So ultimately, my feelings on Threats are that it was an important learning experience. The Human Nation was an undisciplined bit of writing (I even got wrong the number of human chromosome pairs, and it made it into print), but KSAF felt like a good contribution to the world. The lesson here is, you never know what’s going to hit, so keep swinging.