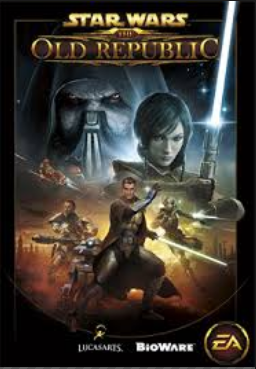 The Old Republic was an enormous, sprawling project. The thing with MMO writing is, each one is a sucking black hole that demands new content, and the demand never goes away after launch.

The thing with SW:TOR is, that sucking black hole demands voiced dialogue.

I was one of three Bioware Edmonton writers that got pulled onto Star Wars: The Old Republic before its launch. I believe I was writer #18, my wife was #19, and the wonderful Mary Kirby was #20. I had about 20 silver-content quest pitches accepted into the queue, and wrote the player-facing dialogue for another 20. The list is a blur to me now, but I recall writing quests for many of the mid-level planets: Balmorra, Alderaan, Tattooine, Belsavis, Hoth, and Taris. I have two favorites that I know for sure made it into the game:

On the dark side, “Coms Away” on Balmorra. You force a conscripted toymaker to booby-trap com units and leave them scattered around for Rebel scavengers to bring back to base. The idea is to have the explosions kill and demoralize the enemy, but as in real life, children often scavenge the war zone, creating a moral quandry.  Kotaku, a game news site, made a list of “6 Messed-Up Things You Can Do in SW:TOR” and apparently this quest qualified.

On the light side, “A Cure For a Planet” on Taris: instead of a quest killing ten rakghouls like every MMO in existence, you walk up to rakghouls and get them to claw you with their infectious nails. There’s a rationale for this — it’s so you can donate antibody-filled blood to medical research and stop them from turning more people into rakghouls. But the sheer lunacy of this suicide mission led to some dialogue I enjoyed writing. It’s not every day that you can feel viscerally satisfied for laughing in a quest-giver’s face.

My tenure on SW:TOR ended when I was told to go to Mass Effect 2. The contrast there was pretty high, despite both games being space adventures. On SW:TOR I had ideas shot down for trying to put science in Star Wars, for good reason. SW:TOR science is, to quote the lead writer at the time, “Blasters and turbo-lasers and BOOM.” He’s right. None of it makes any sense. The closer you look, the more it unravels. It’s about good characters and adventurous fun.

By comparison, when I went on Mass 2 and was told to make a planet for the Galaxy Map, I was handed a chart of the minimum molecular weights of gases retained by the gravity of heavenly bodies and told “Start here.” After some questions of what the heck that had to do with writing (answer: it’s why you can’t terraform the Moon, because its gravity is so weak any air you add to it will float off into space), I leapt on board.

Star Wars: The Old Republic is free-to-play and available here.