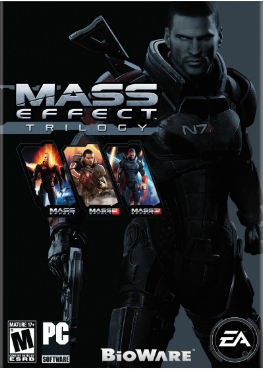 If you’ve never played Mass Effect, it’s one part Star Trek and one part Special Forces bad-ass. You get to save the galaxy and smooch aliens a lot. Its choice-driven dialogue trees let you play as nice or as nasty as you want, male or female, straight or (in #3) otherwise. Half of the game is customizing your experience and watching it acknowledge many of your choices, even carrying them over from game to game.

I helped out a little on the first Mass Effect. I was on a separate project at the time, and all the Bioware writers pitched in at the eleventh hour to playtest it and give some feedback before its release. My suggestions helped out with a few details like salarian biology in the Codex entries.

A few years later, I was on Star Wars: The Old Republic when I was suddenly transferred to Mass Effect 2. When I asked why, the response was, “Three of the six writers just left and a fourth broke his shoulder.” My job was to cover the Codex entries, Galaxy Map, and weapon text in the main game and a lot of the DLC. So, details like the Thanix Cannon and write-ups of planets like Bekenstein were me. I was also responsible for the daily in-universe news reporting, the Cerberus Daily News.

I stayed on for the duration of Mass Effect 3, writing Thane, EDI, and a few missions. I reprised my role writing a ton of Codex and Galaxy Map text. For launch day, I created an Alliance News Network Twitter event using the hashtag #solcomms, as reporter Emily Wong essentially liveblogged the apocalypse. (Archive here, spoiler summary here and obligatory shout-out to Patrick W. and Jessica M. for helping me learn Twitter.)

Yes, this does mean you can blame me for killing off a few beloved characters.

There is a fourth Mass Effect that came out in 2017, Mass Effect: Andromeda. I was only on that project for a few months before leaving Bioware. My only contribution that is likely to have stayed in the game is calculating how long the journey from the Milky Way galaxy to Andromeda would take, and whether or not a “scoop ship” could plausibly take in enough hydrogen to traverse the interstellar medium for 500+ years.

I didn’t choose to be a space nerd. It chose me.

The trilogy is available for consoles or PC here.

A free trial of Andromeda is here.