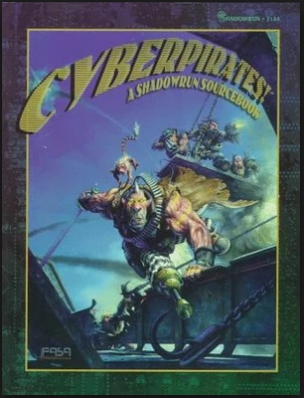 There’s a lot of Shadowrun in this book.

Looking back on it, it has a familiarity with the game lore that borders on the crazy. It references Corporate Shadowfiles like it’s common knowledge, it throws in corporations the audience hadn’t seen since the Native American Nations sourcebooks seven years ago, it even tries to drag in some characters from Prime Runners and give them new life by making them part of Threats. And somehow it covers three and a half places and gives lip service to a half-dozen more, making it in my mind the “rest-of-the-world sourcebook” until other books came along to add to it. In a single breath of retroactive continuity, we said that the People’s Republic of China and the Chinese Kingdoms accidentally mentioned in Portfolio of a Dragon both existed, so pow, fixed, good luck to whoever was going to write that sourcebook.

I was pretty arrogant then. I wanted Shadowrun to be the best it could be, even if I started off not knowing what the hell I was doing.

Shadowrun I knew. Piracy, I didn’t.

In 1997, it was long before Jack Sparrow made it cool to be a pirate again, and well before 7th Sea invited RPG players into the Golden Age of Piracy. My reference point was mostly old Errol Flynn movies that were supposed to be great and Brøderbund’s game The Ancient Art of War at Sea. I hadn’t even played Sid Meier’s Pirates!, which was probably where the line developer was getting his inspiration.

So when Jennifer and I got the schedule for the next year of planned Shadowrun products, my initial reaction to the idea of a pirate supplement was, “Why?” What players were asking for this?

But Jennifer was enthusiastic “This won’t just be a pirate book,” she said. “Think of it as the freelance crime book, and we’ll pick out places all over the world for the runners to go.”

I could dig that. In my high school campaigns, there came a point when the GM got tired, so we started hatching our own schemes. We paid our contacts to let us know when there were shipments of cyberdecks coming through, hijacked them, and sold them in the Confederated American States where the price was four times normal. Some of those adventures were on the water and some weren’t, but that wasn’t the point. If we could get players to spark their own heists, their games would have momentum rather than fizzling when the GMs ran out of ideas.

Then came the question of locations. The Caribbean League was mandatory. Shadowrun had the League on the map of North America but never touched it in any of the source material, and everyone knew that had to be Pirate Central Station. There, the pirates would be flamboyant swashbucklers that would make smuggling and piracy fun.

Next location:  we wanted to pick an Asian country, since we didn’t want to write a piracy sourcebook that all took place in the Atlantic Ocean. Having read Plundering Paradise: The Struggle for the Environment in the Philippines and studied a bit of the Filipino martial arts, we figured we could work in both the Philippines and Imperial Japan, tying it in because we would have a second major pirate motivation: piracy as political revolution. It wouldn’t be like Tir Tairngire, which the line developer aptly summed up as “that really incredibly awesome place where you can’t possibly go.” Instead, players would be actively encouraged to come join the struggle. They’d be righteously kicking butt and evading the police state.

Last major location: Africa. But where? The Barbary Coast, i.e. the general area around Libya, would be historically and thematically appropriate. But it didn’t feel right: if you were going to Africa for your game, you didn’t want a desert off the Mediterranean. You wanted the deep jungles of the Congo, or maybe Azania (South Africa), which had some mentions in Shadowrun’s novels. So checking out historical African piracy, we proposed the Gold and Ivory Coasts and Azania, but ultimately realized we were biting off more than we could cram into one book, and Azania got axed. We would mention it in the “additional markets” section after Madagascar, but steered far clear of Carl Sargent’s ancient elves.

Lastly, we’d wrap it up with rules. Paranormal animals, a few submersibles, underwater weapons like spearguns for when you wanted to go all James Bond like in Thunderball. Jonathan Szeto would be adding ship rules later, we were told. Awesome, we said. Let the experts handle their field.

So it was time to become experts. We attacked the task with a lot of enthusiasm. We checked out books from the Johns Hopkins University: Filipino mythology, turn-of-the-century borders in the Cote D’Ivoire, and of course anything we could find on drug smuggling. We added to the pile with visits to Borders (remember them?) for books like The Philippines: Land of Broken Promises  (where we got the name for the Huk, if I recall). We hit up a first-generation Japanese-American friend’s dad for the kanji we put in the book. When it came to rules, we threw in anything that seemed apropos (what Shark shaman wouldn’t want a harpoon for melee?) and scrounged every waterborne adventure movie we’d seen for ideas, like the dragged-behind-a-boat scene in For Your Eyes Only, or the exploding SCUBA tank in Jaws.

It is one of my big regrets that the Mythbusters later disproved the exploding scuba tank myth. What’s all that Hi-Ex explosive ammo for, anyway, if not to make the gamemaster drop his jaw in surprise and cross off the bad guy’s Condition Monitor?

The treading water rules have apparently gotten maligned in recent years because someone put them in the basic book of 5th Edition, so I’ll mention them here. If they sound irrelevant to you, feel free to rename them the “Avoiding Drowning” rules. They were pretty forgiving and pretty extensive because we imagined a common, specific scenario. There were going to be a lot of characters with decent Strength scores but no Athletics, whose boat just got blown up on the high seas. Suddenly, somebody’s favorite character would have to rip off their armor and keep kicking for twenty minutes until DocWagon could rescue them: could they do it?

And then… in our first draft… we went too far.

We included rules for drugs and poisons, reasoning that since the Caribbean League legalized everything and made bank off of addicts all over the world, that rules for them would come in handy. How much money would you make if you killed Mr. Big from Live and Let Die and then smuggled his heroin farm’s product into the UCAS? We wanted answers for stuff like that. FASA chose not to.

Ultimately, that was probably a fine move. We calculated how much a literal boatload of cocaine could net a shadowrunner, and it was on the order of sixty million nuyen. Trying to wheedle the numbers down by saying you had to find twenty fixers who could afford to buy their shares in it wasn’t conducive to good gameplay. Players’ eyes were going to light up and game balance would get broken in an instant. So the drug rules got axed.

The poison rules got axed, too, except the venomous critters still referenced them. And the language in the Caribbean section about all the drugs that were legal in the Carib got scrubbed, with language that sounded to our ears like it broke character… or just sounded dumb.

This annoyed me. This annoyed my writing partner. So we sent in suggestions for rewrites, explaining why the language was now flawed and reworking the text in the same number of words to show how we’d do it. We sent these notes by fax.

I thought this was how editing worked. We’d refine the text through draft after draft until everyone was happy. But as I said before, I was pretty arrogant then. And I didn’t understand how valuable other people’s time was. Or possibly the office scuttlebutt when a forty-page fax came through and people wondered what it was about.

Cyberpirates! was the last Shadowrun sourcebook to which we contributed.  Our names were taken off the cover. I never really asked why: maybe it was for space reasons because four of us contributed significantly to it. Maybe it was pettiness. But I sure noticed.

For a fair amount of time, I couldn’t bear to look at it. I went on bloody Amazon and posted an author’s note divorcing myself from its content, which probably would have been career suicide had I stayed in the paper-and-pencil gaming industry. Who wants to work with someone who’ll badmouth his co-workers in public once the job is done?

I didn’t think about that. I was twenty-two and only thought about the text being made unclear. I thought about the characters’ voices, including fan favorites Harlequin and Hestaby, devolving into ridiculousness because they had to remind the reader that the Madagascar post was all speculation. I thought about whether or not what I wrote was racially or nationally insensitive; it’s hard for me to say, but the stuff that replaced my text seemed tone-deaf to me.

I stopped talking to Shadowrun players. I stopped playing Shadowrun. And then… twenty years passed.

Now, when I pick up the book, I see an artifact of a different time. It’s a big, thick book with a lot of ideas and a lot of material to run games. It’s got stats for a nuclear submarine and the price of a kidnapped research scientist in Southeast Asia. This book is crazy.

It has a lot of Shadowrun in it.