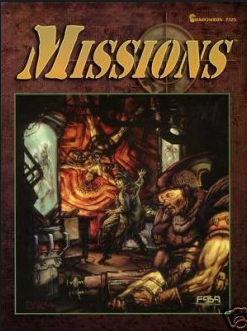 In it, you play Delta Force commandos assigned to take down a fortress beneath a mountain like it’s bloody NORAD. When Uncle Sam can’t nuke it from orbit, they send in you.

In all the gun books and vehicle books and cyberware books in the Shadowrun universe, there was an implied promise. The promise was that somewhere out there there is someone with a bigger stick than you. There are armies of killers who know how to use small-unit tactics and are equipped with stuff that makes the hardware in the shadows look tame. Yeah, a go-ganger might have a LAW rocket that fell off the back of a truck, and the Seattle Metroplex Guard might get called in to deal with a rigger’s helicopter, but you know that even the most hyped-up starting character isn’t a match for the British SAS or Seal Team Six or the Tir Ghosts. And now our job was to fulfill that promise.

The mission was twofold: let the players finally play with all the toys they’ve always wanted to play with, and create opposition that could plausibly match them. On a certain level, Shadowrun had never done this before. The adventure with the deadliest reputation at the time was “The Universal Brotherhood,” where spirits of moderate Force (really, they’re not all that high) chew through cybered samurai easily because of a trick in the rules. Play that adventure with a party full of mages and physical adepts, and you have a good chance of walking out alive. This adventure had to top that.

The best inspiration I could draw from in gaming history was high-level adventures from AD&D like The Tomb of Horrors or (better example) The Throne of Bloodstone, where you could tell your players, “Okay, bring out whatever character you retired because he got too powerful. Don’t care. Let’s party.”

So we wrote with those players in mind when we wrote a very deadly adventure. Just to hint that it wasn’t messing around, we gave it the title “King of the Mountain.”

And that, to a certain degree, is the adventure’s biggest weakness. The adventure got a nice review from Shadis magazine, but I’m not certain they ever playtested it. Because I guarantee what happened in a lot of gaming groups was that GMs whose warning bells didn’t go off said “Okay, we’re going to play the Special Forces adventure. Make some brand new characters, give them lots of hardware, and I’ll start reading it from the beginning so we can see what life as a military badass is like.”

The other adventures in the supplement are fine for that. “Under the Influence” and “Malpractice” are great introductions to Lone Star and DocWagon campaigns. “Mission: Mars” appeals to me personally a little less, but it can work fine to start off an alternate campaign of Ares employees or media (provided said media guys can survive the final encounter).

“King of the Mountain” should not be your first Special Forces adventure. It should be your tenth. There’s a few reasons I recommend holding off:

First, if you expect to make characters in the same night you play the adventure, you’re going to be disappointed. It takes a full night to design a combat monster in Shadowrun, and all your players will want to do so. There’s simply too many options and toys to play with and the game will get bogged down.

Second, players will be depending on Karma Pool to absorb some of the deadliest of the dice rolls. Starting players may have high stats, but in an evenly matched fight, a fast opponent or lucky shot can take them down. The recommended Karma Pool of 3 indicated in the text is, in my mind, pretty low.

Third, if the players’ mages are not Initiates with Shielding, they will be at a severe disadvantage versus spells. The recommended 20 points of Good Karma should definitely be used to grant the team mages Grade 0 Initiation, and just give ’em all the metamagic abilities at once, Grimoire-style.

Lastly, and most importantly, players should be used to playing like Special Forces characters. In other words, they should not go in guns blazing just because they have a deadlier weapon than usual. Most gaming groups will fall victim to this trap. They will want to swing the biggest hammer they are given, and that can get them killed. Special Forces operators, on the other hand, know the value of a stealth attack and actually have enough discipline and teamwork to maintain a silent approach (most gaming groups will fail at this hard — someone always forgets the skill, ignores the plan, et cetera).

Without this caveat, “King of the Mountain” can frustrate the players big-time, and that’s not what you want in your first military shadowrun.

Would I change it, in hindsight? Not really. I kind of like having written an adventure that is a challenge for experienced players. The stats given are pretty effing deadly, because the players are going to be.

Would I tweak it? Sure.  There’s language in there that I think is kind of corny now. The anchored spell when Michael dies seems overly theatrical. And then there’s stats. Bear with me, because I’m going to nerd out about something I wrote two decades ago in a now-obsolete edition.

First things first, Heartbreaker’s skills aren’t 100% suitable to a guy leading a Delta Force squad. I don’t remember why he doesn’t have the Leadership or Instruction skills: maybe they got cut to fit his stats on the page, maybe we never gave them to him because he’d be using it on PCs and players would roleplay it anyway. But for the sake of character, he’d have at least 4-5 points in each. The Players may expect him to be able to kick their butts to back up his leadership role, so if you wanted to bump him up two points in most of his skills and his Initiatory grade, no one would fault you. But if you want him to rely on player characters for their specialties, so everyone works as a team, keeping him a generalist works fine.

Second, I’m pretty sure I wrote that Michael had the Increase Reflexes +3 spell, but that doesn’t seem to have made it into publication, putting him in the well-traveled company of Shadowrun villains with great offensive firepower who never get to act before dying. (It works out okay, given his astral presence, anchored spells and coterie of bodyguards… but you’d think if he taught those bodyguards all they know, he’d have the spell himself.) His loss of an Essence point is never explained, but I would assume an adolescence filled with anti-psychotic drugs would have screwed up his bodily integrity.

Last, the Shatter Armor spell doesn’t mention what happens to armor that takes less than Deadly damage, but that’s easily eyeballed. If it takes Light, Moderate, or Serious damage, reduce its Ballistic and Impact Ratings by 1, 2, or 3 points.

And… that’s about it, off the top of my head. Hope you enjoy(ed) the adventure as much as we enjoyed creating it.