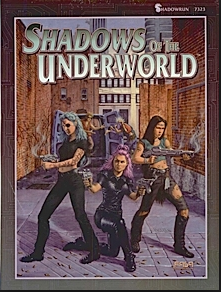 Our second Shadowrun project was to provide a 10,000-word scenario for a book that would be a 5-pack of adventures set in the election of 2057.

At the time, the Shadowrun formula for adventures was a lot of hit and miss. Sometimes you-the-player would follow a trail of clues, sometimes you’d bodyguard someone important, and most of the time, once you got the Widget of Ultimate Power for your employer, he would use said widget to try to erase you. It got so bad that there was even an adventure called “Celtic Double-Cross,” which seemed like the best players could hope for was false advertising.

So I thought, “Why hasn’t anyone done Die Hard in an RPG?” Shadowrun took plenty of action movies for inspiration. Adding to the action movie feel, my writing partner Jennifer and I set it in New York, where no published adventures had yet been, and added a famous landmark that could get destroyed: the Empire State Building. Jennifer, who had been to the building, helped flesh out the details. For the title, only one word would do: the New York State motto that meant “ever upward”: Excelsior.

So first we disarmed the players. We gave them dangerous opposition. We made very sure non-suicidal players didn’t try anything that would get them killed in the first few seconds. Then we let them figure out how to get their hands on some weapons and gave them the action-movie moments they’d been waiting for. You have a Demolitions skill? Congrats, you get to defuse the bomb. You have Negotiation? Sure, you can hoodwink some fools. You want to cast Levitate Person on a bad guy, throw him off the Empire State Building and have him fall 100 floors? In our first draft, we calculated the damage code. (Wisely, the final product just says “it’s certain death.”)

We playtested the adventure twice, once with me gamemastering and once with fellow Shadowrun author Zach Bush running the show. This last was key: we knew we had to have someone who wasn’t the author road-testing it. Reportedly, Zach’s players complained, “Hey wait, what the hell, we’re in Die Hard?” Then, five seconds later, they said, “You know, Die Hard was pretty cool.” We took that as a stamp of approval, and sent in the final draft.

I’ve only seen one or two reviews of Shadows of the Underworld — it was never the most hyped of products — but the general consensus is that “Excelsior“ works pretty well. It’s simple… very simple… but it has enough details fleshed out to make it worth the GM’s purchase instead of making something up on his or her own. There’s rules for getting knocked off the roof and hanging on by your fingernails, a conveniently placed Demolitions skillsoft and time estimates for getting clear of the bomb, little bits like that.

As for things I’d do differently now that I am old and gray, I wish I’d added one line of explanation early on: the handwave for why the terrorists have access to their guns when the players don’t. It can be inferred, but I’ll say it. Our heroes come in via the ground floor where there is security. The enemies take their Blade Runner advert-blimp, dock it on the observation deck (fun fact: the spire on the Empire State was originally intended as a blimp dock), and cut through the fencing. They stroll right in.

So that’s the adventure, now how about the product? Of the other four adventures, I only ever ran one of them for my home group, “C.O.D.” by Brian Schoner. Though I initially had my usual “ugh” reaction to any more Shadowrun products featuring dragons, when I actually ran it, I found it to be a lot of fun. The adventure was playable in a night, the players let loose with action-movie mayhem, and the plot generally held up to scrutiny. Jennifer and I liked the adventure so much we used the dragon later in Cyberpirates, fleshing out who he was and making him influential in his homeland, as dragons generally are.

Any other quibbles about Shadows of the Underworld are not worth re-hashing these many years later. There’s some language I wouldn’t have used, but there’s also a witty line (“Closed for Extermination”) that got added, so you take the iffy with the good.

Oh, but for those reading the credits page, my name is not “Chris Helpen.”

Or as Stan Lee would say, “Excelsior!”

Shadows of the Underworld is available here.