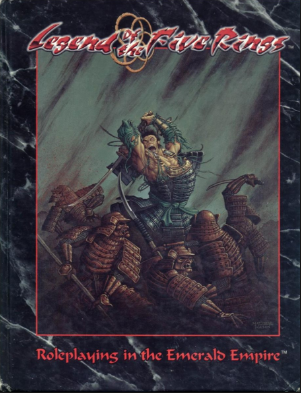 The last paper-and-pencil roleplaying game I wrote for professionally was the first edition of Legend of the Five Rings. “L5R” was initially a card game about warring noble houses of samurai, adding a story with each expansion pack, ultimately fleshing out the world with RPG supplements. At conventions and on-line, the game developers tried to make the game stand out from Dungeons & Dragons and its many clones. With the game now coming up on its 20th anniversary and its fifth edition, I don’t have to spend many words to argue that it succeeded.

At the time, D&D suffered from a certain inertia in the way it was played and the way people thought about it. You played “adventurers,” who went around fantasy kingdoms killing monsters, taking their treasures, and eventually, maybe, if your campaign lasted a year or more, you’d settle down around 10th level, marry a baroness, and have to worry about king stuff. As the Game of Thrones fans say these days, for most of the game you were “murder hobos.”

There’s precedent for this in Western literature (the Odyssey comes to mind), but dollars to donuts, no one in the group was picturing that. They wanted to kick butt. Preferably evil butt, but there was always at least one guy in the group who wasn’t too picky. If you didn’t give them an external enemy, they’d probably devolve into intraparty homicide.

L5R, by contrast, gave your character responsibilities and an immediate stake in the world. You were samurai. Your parents, your lord, your fellow soldiers, they all demanded you serve the clan. You could be a team of Emerald Magistrates keeping order among the clans, you could be a sorcerer arranged into a loveless marriage or his swordsman friend who bailed him out in formal duels at court… and you could do it all in your first adventure. Even if you were a crude monster-hunting goon who rejected all this, you were from a family that defended civilization from the Things Beyond The Great Wall. The emphasis was on a) a story of martial arts fantasy, and b) the fact that you were important to it.

My writing partner Jennifer and I got hooked. I gamemastered for our just-post-college friends and in the process sent a long letter with suggested fixes and questions to the dev team. Things naturally sprang up in the game like, “Okay, we have male and female samurai on the road together. What’s the etiquette on bathing? Is it like in modern Japan where it’s communal and considered non-sexual? Even so, wouldn’t rumors start that might impinge on a lady’s honor?” Some of the responses to the letter found their way into a supplement called Winter Court: Kyuden Seppun, where we were tapped to write a very little bit of it. Then came an offer we weren’t expecting: write a sequel to the book dealing with the Shadowlands.

The story of Bearers of Jade is here.

Because of our enthusiasm for the L5R world, my writing partner and I ended up creating three, multiple-play-session, roleplaying tournament adventures at the Origins and Gen Con conventions. We posted them on the Web, where they found an audience. “Mirror, Mirror,” “Fortunes Lost,” and “Hindsight” are available here.