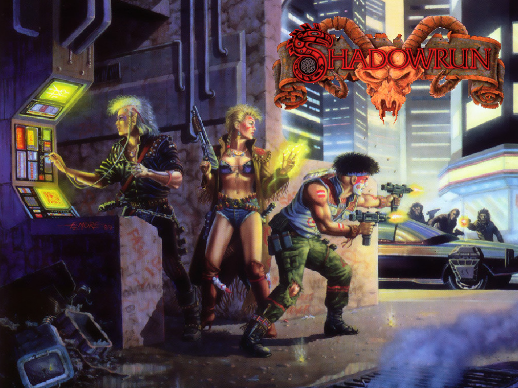 Oh, the 1990s. It was a time when cyberpunk didn’t know what Wi-Fi was, and “brick” boxes of six-sided dice came 36 to a pack. In FASA’s near-future/high fantasy mashup, those bricks of dice became very handy indeed.

For those who have not tried it, Shadowrun is our Earth, set about 60 years into the future. Magic ebbs and flows in 5,200-year cycles, and on December 24th, 2011, it came back with a vengeance. Dragons emerged from their hidden slumber, humans started giving birth to elves and dwarves, people mutated into orks and trolls, and 1% of the population could actually master casting straight-up spells.

The history of the world was given in great detail: the elves took over Oregon and the equatorial rainforests; technology marched on and built a worldwide virtual reality computer net called the Matrix (yes, that Matrix); mega-corporations rose to power, making squabbling, fractured nations their personal playthings. You played a shadowrunner, a professional criminal in a world where business was booming. Sometimes the job was to pluck data out of a secured corporate facility; sometimes it was to count coup on some immortal elf for a magical ritual; sometimes it was just to find a missing person who wound up in a cult full of insect spirits. The adventures were endless.

Jennifer Brandes (now Hepler) and I were in college when we first submitted proposals for the Shadowrun universe. Our first project was a multi-author sourcebook of recurring bad guys to give gamemasters ideas. Over about a year and a half, we kept contributing adventures and sourcebooks, but ultimately parted ways with the company over creative differences and general freelancer issues, just before the third edition of the game was released. I haven’t really looked at the game since, other than flipping through supplements at the local gaming store.

The supplements we contributed to were:

Shadows of the Underworld

Portfolio of a Dragon (just a little bit)