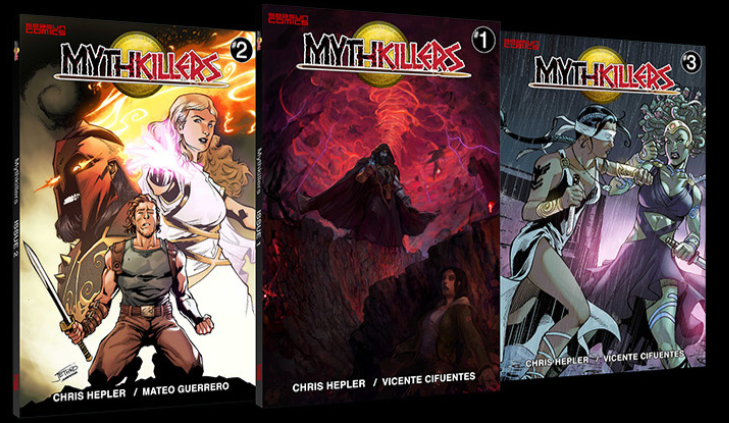 I’m happy to announce that my work with Seasun Comics has at last gone to press with Mythkillers, the urban fantasy comic I’ve been working on for the last year. Mythkillers is the story of a teenage demigoddess, her clay golem best friend, a snarky Zulu fairy and an immortal Greek warrior teaming up to stop a dark god from wrecking the afterlife in his bid for power.

We’ve had Mythkillers #1 printed for a while, but now all six issues are up on Amazon Kindle. Here’s the link.

Issues 1 and 2 are available through ComiXology, but as of this writing, they are still processing Issues 3-6.

“But wait,” you may say, “What’s going on with your other projects?”

(Narrator: No one says that.)

The Civil Blood universe is still kicking, and I’m still revising “Infection in Everything,” a short story involving Infinity and her jiujutsu teacher. And I’m still submitting “Stopping the Bleeding” (a post-Civil Blood story about a new character) and the original humorous piece “The 10:40 Appointment at the NYC Department of Superhero Registration.” To make a long story short, there are a whole lot of short story markets out there and they’re all closed to submissions for the immediate future.

Okay, not all. But seriously, it’s a thing.

That’s the latest. I’ll post more when I know more.

Those of you just joining me may look at my last blog post and say, “Egads! It’s been three months since the last update! Where has Chris been?” And the answer, of course, lies in the text of the last update — I’ve been doing my day job, which has, like most hazardous gases, expanded to fill the size of its container.

The good news is, the job is pretty cool. When we last left our intrepid hero, I was Kickstarting Mythkillers. In short, Mythkillers is an urban fantasy that is sort of like if you took the ancient bloody-minded gods from Sandman and gave them to the goofy motherf***ers writing Guardians of the Galaxy.

We were successfully funded on Kickstarter, hit two stretch goals, and have been busily making the comics ever since. Since my last post on this blog, I added somewhere around 37 articles on the Seasun Comics news page, which explains a part of my conspicuous absence. If you’re looking to check out Mythkillers, we’re currently using Indiegogo’s InDemand as our online store. I posted a general FAQ for people new to the comic here.

But like any good act of magic, the reasons for my disappearing act here comes in threes.

The second reason I’ve been absent is more related to an old, long-held vice. From 2005 to 2012 or so, I played a massively-multiplayer online roleplaying game called City of Heroes. The game shut down in 2012… officially. In May or so, it was revealed that a secret cabal of reverse engineers had actually managed to illegally keep the game’s source code and played it on a private server for the last six or seven years. And then they reopened it for public play, free of charge, with the game company tacitly agreeing not to prosecute anyone for literally saving Paragon City.

It is difficult for me to express how much I loved City of Heroes… okay, it’s not difficult, but most of you wouldn’t understand me if I said “I got the Isolator badge the hard way in Recluse’s Victory and Disruptor on my empathy defender.” I’ve toned my fanaticism down a bit this time around, but I can now play it with my son, who enjoys creating characters just as much or more than he actually likes playing the game. So the game is a factor as well — it sucks up time I would have spent writing.

But that doesn’t mean I haven’t stuck with my plan to write short stories and sell them to try and finance a Civil Blood sequel. Far from it, in fact. The third thing I’ve been doing in the evenings rather than post updates to the blog is the actual writing of short stories. I finished two recently and sent them off to a writer’s workshop.

The first, “The 10:40 Appointment at the NYC Office of Superhero Registration,” humorously imagines what the superhero equivalent of the DMV is like. It highlights the down side of being a regenerating hero, which is that to register your superheroic abilities, you have to demonstrate them, i.e. get the mess beaten out of you by a big dude in power armor who doesn’t know what a safe word is.

The second story is from the Civil Blood universe and is, of course, much darker and more serious. It deals with Infinity returning to Los Angeles after the events of the novel and meeting up with Katie, the martial arts instructor who was like a mother to her. Infinity chooses to “come out” to Katie as a vampire, but she can’t go home again the way she’d like to. The story’s title, “Infection in Everything,” refers to the vampire virus VIHPS as well as a passage in Musashi’s famous martial arts manual The Book of Five Rings.

So hopefully, both these stories will see the light of day sometime. I suspect “The 10:40” will be an easier sell, since SF magazines perpetually say they’re starved for humorous content. I think it hits a good mix of slapstick and poignancy, and it’s high time someone wrote a story about the super-saturation point of comic book crime-fighters.

They do say, “write what you know,” right?